NOTE: The article was originally published by me on ASiteCalledFRED.com

February is the shortest month of the year but it felt like the busiest I've ever been. Crazy month. Hence why I'm a couple days late with this. But thankfully there has still been lots of cool things online to share with you.

This is one of the more childish things I've ever posted here but it gave me a good hearty chuckle. As explained at the start of the video, the driver of the car will be hidden and appear invisible to the drive-thru attendants. Normally I would roll my eyes at such things but the reaction of the staff is genuinely amusing.

Fast-food employees of the world, I salute you.

I love the Venture Bros. We all do here at FRED. And it appears YouTuber JackMuu does too as he has perfectly recaptured one of my favourite scenes using the Team Fortress software.

Check out the henchmen suiting up in the clip below.

Zach Galifianakis has been doing these mock-interviews on Funny or Die for a long time now but I think his recent Oscar special is my favourite. Jennifer Lawrence and Anne Hathaway steal it for me, especially with some rockin' drunk acting from the latter.

I really hate fat jokes. They're the lowest form of comedy outside of fart jokes. It's lazy and cruel and really pisses me off.

It appears I have an ally in this cause with Adam Hills. On his show he had this rant about what Joan Rivers said of the singer Adele after the Oscars.

This one is more of a plea than a recommendation. Three years ago I took part in Red Nose Net, a 24 hour webcast with Widgett Walls and Ken Plume to help raise money for the very worthy charity Comic Relief.

This year Ken did a 25 hour webcast on his own as part of the 25th anniversary of Comic Relief and has re-released the charity single from 2010. 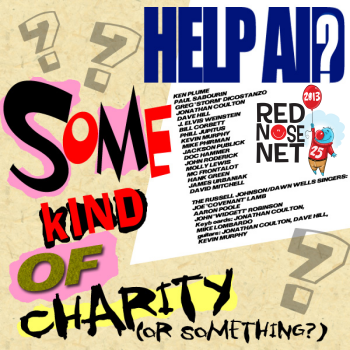 Every bit of money helps so please, if you have 99 cents handy, download the song and listen while knowing you've done something good today. You can do so by CLICKING HERE for all the details.