This article is being posted later than advertised due to there being two collected trades in this week's batch and BACK OFF, OK?! I've got shit to do. 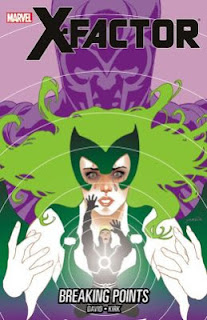 Peter David has been writing this current X-Factor run since 2005. Taking in to account that he also wrote it for a long time in the 1990s and you can safely say that it's his book to do with whatever the hell he likes. For the most part "whatever the hell he likes" is usually "pretty great comic books". But inevitably, if you write a story for that long, it's going to change a lot as it goes.

Over the years X-Factor has gone from being a cool pulp/noir style comic to recently being a crazy mystical mutant comic. The transition has been natural enough as it has taken place so slowly but nonetheless a little jarring considering why I fell in love with it so many years ago now.

The team has changed a number of times too over the course of it's run but it is still technically an X-Men series so that's par for the course... 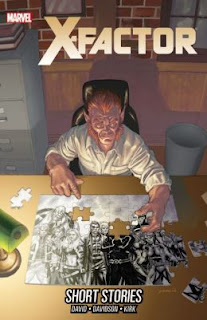 ... Why I'm trying to get at with all this is that I'm not entirely sure I like the book anymore. A lot of the original pieces that I enjoyed are now either missing or have changed significantly.

Madrox isn't the focal point of the book anymore. Guido is gone (in more ways than one). They don't really investigate cases anymore. Hell demons keep attacking the team. Monet is just angry, nothing more. It's kinda getting boring and that's the one thing you don't want to happen when you read a comic book.

If I'm honest, I feel bad ragging on the book. It's not quite bad enough for me to stop buying it yet and Peter David is currently recovering from a stroke so it's like kicking a guy when he's down. Honestly, one of this comic's saving graces over the years was that it was safe from all the crazy cross-overs in Marvel. However, some how it has made it's own stories even crazier and I'm not sure that's a good thing. 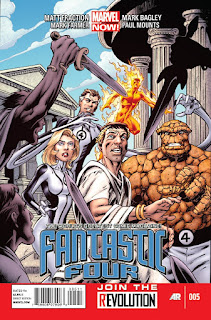 Fraction's journey to the centre of the Fantastic Four continues. It's starting to become a little clearer what he wants to do with the series. It seems we're taking a slight step back from the intergalactic drama and focusing more on the family dynamic. While that is admirable and certainly common for these heroes, I have to put a ticking clock on my continued collection of the series.

Something is not sitting right with me. It's partially the art and colouring which I'm really starting to begrudge. It's painfully garish. Mostly, it's the mundanity of the stories. Sometimes all ages books are great fun but this just feels... child-like. It's the best I can describe of my feelings but these done-in-one stories are just not doing it for me.
It's a shame but I'll give him two more issues (7 is a common number in comics to reveal a full story-arc) and then I may be out. 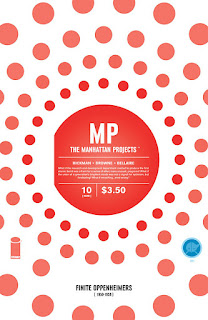 This book on the other hand is getting better and better.

This month's issue revolves solely around Robert Oppenheimer. Robert was killed, eaten, and then replaced by his psychopathic twin brother Joseph (all this takes place in issue 1) and now we follow his adventures in his brother's mind.

To say that this comic features Robert Oppenheimer on a beheaded horse carrying a tied-up manifestation of one of his brother's multiple-personalities as he rides across his brain is harder to phrase than you might think and a lot of fun to read in a comic.

For god's sake just start reading this thing already!
at 13:51