Thankfully the Image delivery truck got it's act together and I was able to pick up last week's omission. Huzzah! Which is serendipitous as it means that the two comics I bought this week are my two favourite comics right now. 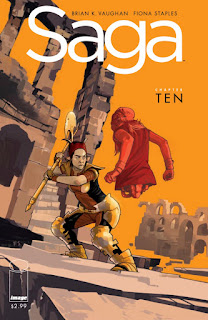 I don't think I've read a comic with Fiona Staples art before this one. Now, it's all I want. She is amazing. Of course, she is being helped by Vaughan's imaginative writing and unique characters but she brings them alive in a way few other artists could. They're fantastical while still feeling real. They're incredibly consistent in their structure (sadly, this is something that's not always common in comic artists, one characters face can look completely different from one page to another) and she has a wonderful way with expressions. I want to say how they're very emotive without ever losing their realism but I can't find a better way of expressing it myself other than that. And this is me just talking about her figures, forgetting the lush backgrounds. So when I rant and rave this much, you know I'm in love.

This issue sees The Will catch up with our space-faring lovers but meets a bigger problem at the same time... that sentence will make more sense after you read the comic. And you should read the comic! 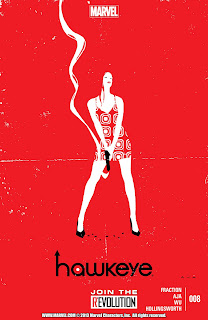 This is the song I sing in my head every time I get an issue.

It's incredibly addictive. As is the comic.

I dislike writing terms such as "nerd-boner" and the like but I have become quite obsessed with this series since I've started reading. And I don't pretend to be hip and claim that I've been reading from the start, the first issue I picked up was #4. By the way, I've retroactively bought 1# and 2# but I'm still short #3 which has become my Everest! Anyway, what I'm trying to say is that this series has inspired the kind of fanatical fervor that I haven't seen in myself since my teens. I would legit kiss Matt and David on the mouth I'm so head-over-heels for it.

Added Bonus: This month features some awesome guest art by Annie Wu who I've admired for a long time online. Stoked to see her work in a Marvel comic. Hope to see more of this sort of thing happening in the future.
at 15:11