Rather annoyingly, my local comic book store was sans-Image comics this week. This means I'm short a SAGA issue. This is not good. Apparently the U.S. have had some bad weather recently, especially wherever they ship Image comics from. Grrr.

Don't worry folks, I'll keep shaking my fist at the sky until it's all resolved and I can have my precious, precious SAGA. 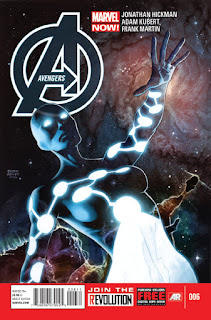 Things have really slowed down now. This is the third issue in a row to take a closer look at a new member of the expanded roster. This time it's Captain Universe, a rather cool concept of the living embodiment of the Universe symbiotically living inside (or on top of?) a young woman who seems to have had a traumatic past.

Also featuring this week is the presence of none-other than Superior Spider-man, the creepy Doctor Octopus/Spider-man hybrid. And man, did I have a gut reaction to him. I know he's not Peter and I know this is temporary but to have someone in the Spider-man costume being such a colossal dick, well it creates an instinctive response of anger. Maybe I'm not as cool and uninvolved as I once thought I was. I firmly await the removal of this usurper.

Bonus material of a decoder page at the back of the book for the alien language. I look forward to going back through the older issues to find out what they were saying! 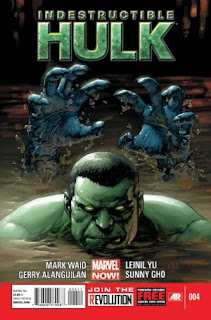 Waid continues what has been a bit of a sleeper hit in my eyes. I haven't seen too much talk about it online but I'm finding this new direction for Bruce Banner to be a welcome one.

Bruce has set up his think-tank now within SHIELD and has assembled his team for their first meeting. We find out that Bruce is living in creepyville. He makes regular check-ins with an unknown friend in New York (my guess is Reed Richards). And things get submarinal as we dive into the oceans for Hulk's current melee-du-jour. 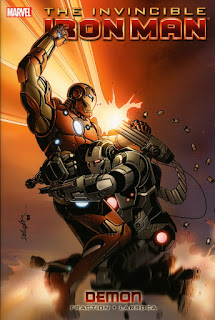 I decided against reading Kieron Gillen's Iron Man series when Marvel Now launched because I disliked the look of the book. I'm fickle. However, I've adored it's predecessor despite the fact that I really hate Salvador Larroca's style. I've been reading it in trades since the beginning and there is only 12 volumes in Fraction's reign so I'm getting close to the end.

One note of criticism that I've noted from other people about the series is the point that during the Fear Itself story Tony Stark fell off the wagon. It was only for a day but nevertheless considering his history and status as a recovering alcoholic, this was a pretty big deal in Tony's life.

Some people questioned the integrity of this move. They said it was a cheap stunt that had no basis behind it. I'm here to say that those people are wrong. Dead wrong. And if they had been paying attention to this series, it's kind of exactly what needed to happen.

Now first, let me point out that it's hard for me to feel like I can really talk about alcoholism from any sort of acurate stand-point. I don't have much experience with the disease outside of knowing a person or two who suffers from it. I don't really count that as personal experience. Writer Matt Fraction however has been very honest and open on his Tumblr blog about his alcoholism and his history with it. With that in mind, if anyone is going to deal with the topic, then I think the man is qualified to do so from a pretty firm understanding of the situation. Something tells me the decision to let Tony drink was not taken lightly.

Invincible Iron Man did a lot of things as a series. For one, it brought back Mandarin. It also helped reset some of the damage done to Tony Stark, the character, after Civil War and events surrounding it. It is, in all sense and purpose, a book about redemption. It's also a book about mistakes and seeking help, something that goes hand-in-hand with Tony's illness. With all this in mind, Tony's moment of weakness when the world was ending makes sense and is also necessary for the overall narrative arc.

Anyway, that was on my mind.

More comics to come next week, with a new #Hawkguy and hopefully the most recent issue of SAGA!
at 18:10