Just two purchases this week. Two new Marvel series started this week also but after flicking through them I realised that they probably aren't for me.

Secret Avengers perked my interest because of Agent Coulson being apart of it, but the art wasn't pleasing for me and I wasn't particularly moved by the rest of the roster either. Uncanny X-Men also started back up this week with Bendis at the helm. Normally that would excite me but something about the book seemed to repel me and I have no idea what it is. Possibly the stupid helmet they have Cyclops wearing in it, I don't know. Either way, I passed on them both.

I'm still on the look out for a new series to follow so we'll see in the coming weeks if I can find anything that clicks with me. 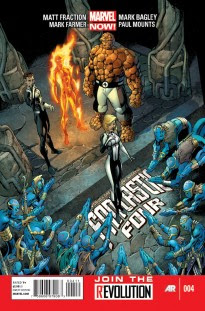 Ugh, I really dislike Bagley's art. It's just so... generic. All the faces are similar, to the point where they're almost indistinguishable from each other and that's a big pet peeve of mine. It's the reason why I won't buy anything from Greg Land. The colours (done by three gentlemen here) are garish too. Despite this being a very colourful book I find a lot of the panels difficult to look at.

What I'm trying to say is, I'm this close to dropping this series.

The only thing keeping me around is my faith in Fraction as a writer. I feel despite his rocky start (which he admitted himself recently on his Tumblr page) he is genuinely passionate about Marvel's first family and I know he wants to bring a lot of his own family experiences into it, which should make for a great read.

I'm just waiting for that to start happening. This week's story was a slight improvement. Lets hope that becomes a trend. 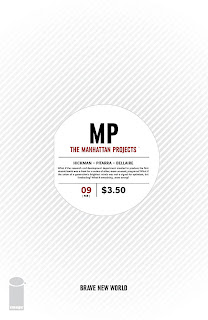 First of all, let me just say that I love the covers for these books. Uniformed but different each time. I know this is Hickman's influence too as you can see it in all his comics. He really has a great eye for design.

This issue seems to wrap up the current story arc of the invasion from President Truman and sets up the next with JFK and the moon. Everything is as insane as usual while the chess pieces are being repositioned.

For the first time I realised that this series must have an endpoint and one that isn't too far away. Mostly because of the new president coming to power reminded me of the movement of time within the book, it's speed so far, and the finite nature of using real characters.

I can only imagine this book ending with the universe imploding (the story's universe not our real one) but maybe that's just me.
at 17:49