This week, comic book day arrives on pay day and that's a damn fine thing. Here is my haul: 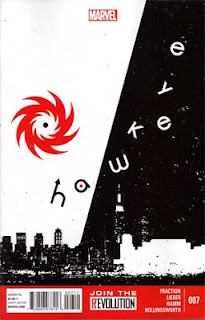 This issue was written after Hurricane Sandy hit America's east coast and Fraction (a former New Yorker) wanted to acknowledge it in the series. As a result, to try and fit it into the schedule with such late notice, this issue has two artists telling the two intertwining stories separately. Luckily the amazing Matt Hollingsworth is still on hand to do the fantastic job on colouring that he has been doing since the start.

This is one of the books that I'm giddy for every time it comes out, such is the quality of writing. It's probably the most subdued super-hero comic out there but that's the beauty of it. It's all character.

Speaking of character, Fraction is donating all his pay for this issue to The Red Cross, so if you're even just a little curious about #HAWKGUY then go out and buy it with good conscience. 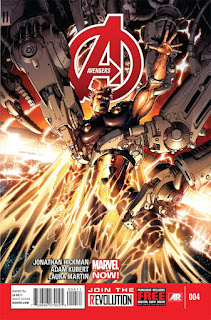 Once again, Marvel is hitting me up with the two-weeks-in-a-row-for-the-same-series action. Things are winding down after the events of last issue so Hickman is taking this time to introduce us a little to the, now expanded, team.

Hyperion is a character who looks quite retro in style but I'm not really aware of at all so I'm glad this issue revolves around him. I'm getting shades of The Sentry from him which depending on who you ask is either fascinating or god-awful. I can't decide myself which yet but things don't bode well.

This issue also sets the premise that things haven't quite been wrapped up in the neat little bow that I thought it was last week. I'm glad. This will make things much more interesting. 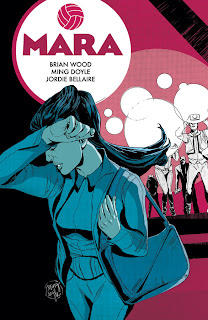 Mara is a limited series. Only 6 issues in total. So far, that seems like a strange idea to me as it has the kind of premise that could really run.

Mara is a star volleyball champion in a future world that has become obsessed with competition. Unfortunately it becomes apparent, quite publicly, that she has some sort of supernatural power. As you can imagine, things go downhill for her from there.

I gave this series a shot due to previous love of both Brian Wood and Ming Doyle and so far neither have disappointed. I have no idea where the story will go from here and that's about all you can ask when reading anything other than instruction manuals.
at 14:52