I will refuse to use phrases like Rocktober. October does not deserve such a title. It is merely an OK month for me. Folktober might be more accurate.

Despite my apathy for the month, some rocking things did happen. Let us look at my favourites.

I like space stuff. By the sheer fact that I refer to it as "space stuff" you can probably tell that I'm not very knowledgeable about any of it. But you know who are? NASA. They've got a website called Astro Pic Of The Day and it gives you an awesome picture like this: 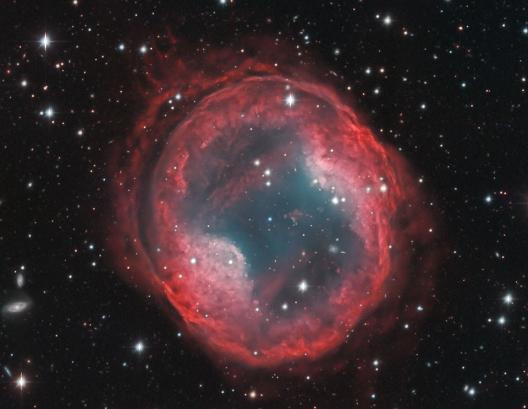 And an easy to read description of what it's all about. Apparently this is the remnants of a star, just like our Sun, that ran out of hyrdrogen. At the very center you can see a white dot which is what remains, a blue-hot white dwarf star. Cool, huh?

As the title suggests they give a new picture everyday and you can follow on Twitter too which is pretty handy.

As many of you may know, the OSU Marching Band is famous for being pretty bad-ass and for a long time now have been putting on awesome shows at half-time. How awesome you ask?

And marching band people are not considered cool over there? You Americans are crazy.

There are times when I think we, as a species, should give ourselves a pat on the back. Curiosity rover on Mars was one moment this year. Another is a dude dropping from the edge of space and walking away from it like a boss. Felix, I salute you, you crazy diamond.

One company that has it's head screwed on however is Bodyform. For those who don't know, Bodyform is a tampon/sanitary pad company who have been famous over the years for their advertisements such as this little beauty showing women in various different situations enjoying themselves.

A man by the name of Richard Neill posted this comment on their facebook page on the 8th of October:

"Hi , as a man I must ask why you have lied to us for all these years . As a child I watched your advertisements with interest as to how at this wonderful time of the month that the female gets to enjoy so many things ,I felt a little jealous. I mean bike riding , rollercoasters, dancing, parachuting, why couldn't I get to enjoy this time of joy and 'blue water' and wings !! Dam my penis!! Then I got a girlfriend, was so happy and couldn't wait for this joyous adventurous time of the month to happen .....you lied !! There was no joy , no extreme sports , no blue water spilling over wings and no rocking soundtrack oh no no no. Instead I had to fight against every male urge I had to resist screaming wooaaahhhhh bodddyyyyyyfooorrrmmm bodyformed for youuuuuuu as my lady changed from the loving , gentle, normal skin coloured lady to the little girl from the exorcist with added venom and extra 360 degree head spin. Thanks for setting me up for a fall bodyform , you crafty bugger".

Not ones to be outdone with a bit of comedy at their own expense, the guys and girls at Bodyform crafted this response. It is, I think you'll agree, brilliant.

And finally, as the east coast of America gets hit by a pretty nasty storm all our thoughts here at FRED are with our friends and family out there. Hope everyone makes through it OK.

As inspiration, here is a shirtless horse-headed man running through the streets of the storm. You can do it, guys. Let him be your spirit animal.