﻿For some reason, only known by Guy Hutchinson himself, I was sent a Dennis Miller talking doll to parade around Dragon*Con. If you're unfamiliar with why a Dennis Miller doll exists, get in line, but Dana Snyder was selling it on eBay and Guy thought it would be funny to buy it and send it on adventures.

I agreed to accept this challenge and so this is the photographic evidence:-

On Friday we had the FRED panel which consisted of me, Ken Plume, and most of Ken's friends at the Con. You can see here how Alex Day, Joseph Scrimshaw, and Ken all try to ignore Dennis crashing the panel.

﻿ Next was the FRED Doctor Who panel where me, Ken, Joseph, and Molly Lewis gabbed about the show. By this point Ken felt that Dennis' presence at the panel needed explaining as Mr Miller is not a timelord.

So this is me trying to explain to the Doctor Who fans why a mildly racist talking doll was sitting on stage with us. To prove my mildly racist claim, I played some of Dennis' audio to the crowd... We were lucky to make it out of there alive.


Dennis' racist jokes were making a bit of a stir and later on Doc Hammer needed to have a listen for himself. Ken Plume wanted to thank you himself for unleashing the beast upon us. Can't you see the happiness in his eyes?


Because of Dennis' outrageous rants we decided to leave him back stage at the big Gonzo Quiz Show, where he got to grips with our drinks table. 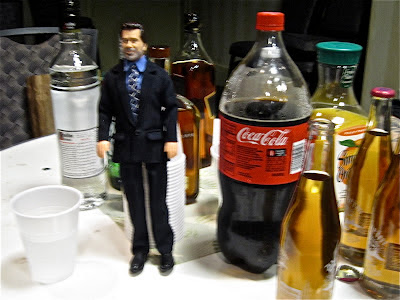 Maybe he got too familiar with the drinks as we later found him getting a bit over exhuberant with our bottle of Cabin Fever whisky. 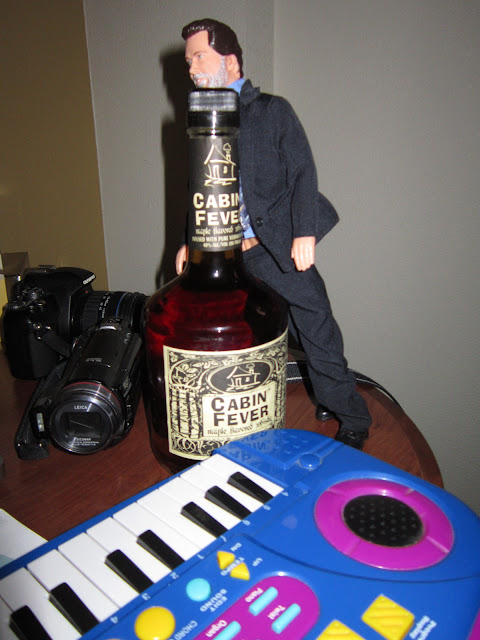 The ladies were none too pleased so they decided to de-pants Mr Miller in order to shame him for the naughty boy that he is...


...only to find a little message from our tormentor himself. 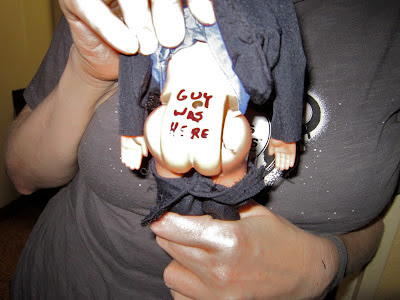