The Road To Poland: Traps and Tanks 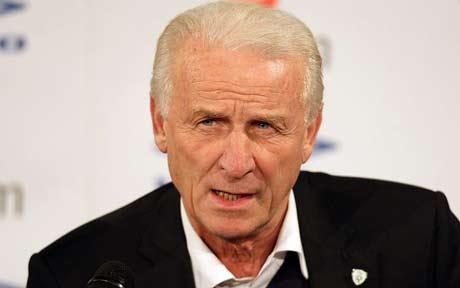 For those wondering who the sexy older gentlemen is up there, he is manager of the Irish football team, Giovanni Trapattoni. He may be Italian (as you may have guessed from his name) but the old sod loves his team and in turn we, the fans, love him. For proof, watch him get all choked up after we qualify for the tournament and he's asked how proud he is. Jayzus, I'm getting a little weepy myself just thinking about it. But it's not just his passion which is so wonderful (sorry, ladies) but his career also.

One of only two managers in history to win the top league title in 4 different countries. He is also one of only two managers to win all three major European trophies. I'm even going to straight-up paste the next bit from Wikipedia: Also, he is the only one to have won all UEFA club competitions and the World Club title, also having the record of UEFA Cup wins (three). So the guy is a bit of a genius.

What he's not perfect at, however, is English. He's still learning and at age 72 he's doing a pretty brilliant job at it, but he's not quite fluent yet. This results in quite a lot of fantastic quotes from his press conferences though as he refuses to use an interpreter most of the time and just comes out with unusual stuff.

Yesterday he had a press conference and was asked about his defensive tactics. I loved his response because not only was it smart but it was honest.


I'm not presumptuous, but at Inter, Milan, Juventus, my teams scored. I had champions, yes, but we always scored more than we concede. Is that defensive? It's football.
I never say stay. I say go, but go with balance. The match that Ireland lost against Cyprus... go up front and boom, boom, boom, concede five goals.
I never forbid the players to go. I wish the players to go as we need offensive play. When you lose the ball up the field 70 metres it's a motorway for the other team.
We have good potential, enough potential. Spain is Spain, the world champions. But 90 minutes will be 90 minutes for us.
I repeat, on the pitch there is only one ball, you either have it or you don't and when we don't it's important not to concede.
We can play with quality. We don't have many creative players, but we have the right players, football players, with the right attitude.

That match against Cypruse was 5 years ago and was the reason why is predecessor lost his job. Since then? Well, Trapattoni came in and things got a hell of a lot better. I love that man.
---
In other news regarding the tournament: The Irish Independant published a story about Polish drunk-tanks; a rather scary scenario I would like to avoid.

Offending fans could be sent to 'drunk tanks' where they will be stripped naked and hosed down with cold water. They will then be charged €80 to leave after sobering up.

One man, who was arrested walking home drunk from a party, said: "It was probably the most terrifying thing I've ever gone through. I was strip-searched on arrival and made fun of in front of female staff.
"When I protested they threw buckets of freezing cold water over me and then tied me to a bed with leather straps and left me there all night."
In other cases people have complained of being beaten with rubber truncheons and of being forced to do push ups outside while naked.

Guess who I'll be avoiding while over there? To read the full article click here.
at 18:24