From The Vaults: It's Not Easy Being Green

NOTE: I wrote this in 2009 for NeedCoffee.com. It was part-article part-angry-rant. I hope it gives you some insight into St. Patrick's day... 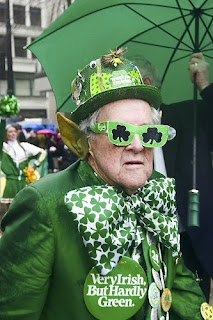 We have hit the international holiday of "Lets get people to wear a silly green hat" and I'm not exactly feeling very festive.

It's not that I don't enjoy a good celebration, it's just that I'm not entirely sure what we're celebrating.

St. Patrick is the Patron Saint of Ireland. One of three, by the way. The other two being Brigid and Columba. I'm not sure if their seemingly lower status as Patron Saints has anything to do with women so I'll let you decide that yourselves. All I do know is that when it's Paddy's day... you have to celebrate.

Sometimes I feel disillusioned with what it means to be Irish and I think it can be understandable. St. Patrick himself wasn't even Irish. He was a young Welsh boy called Maewyn Succat (apparently St. Maewyn just didn't have the right ring to it) who, during his teens, was kidnapped by Irish raiders and forced to be a slave for around six years before he made his escape back home to his family across the water. Once he became he priest, it was only due to his peers--deciding that he must spend his time converting some of the heathens back on that feckin' island--that he happened to set foot once again on our land. I wonder how many times he cursed his luck when he got that letter.
Most of the legends about the man aren't true either. It's scientific fact that there were no snakes in Ireland post-glacier times. Of course you can take most pious legends with a large pinch of salt and see it as a metaphorical explanation of his conversion of the pagan natives and his casting out of their demons, etc.--but most metaphors in life don't culminate in tourists walking around your streets with blow-up snake figures and telling us how lucky we are that Pat got rid of them because they can be an awful pain when they bite you.


One thing that he did do got stuck with us forever also. The shamrock. He used it as a very basic tool to show how its three leaves can be compared to The Father, Son and Holy Spirit that lie within God. This is a nice notion and clever use of the props available to him during a very barren and poor period in our history. I'm sure he wasn't expecting it to be adorned on everything associated with the country forever more. If he did he would have gotten better copyright retention. It's an odd thing to me that what is essentially a weed is supposed to be considered something of such great pride. You wouldn't get that in most countries. Well, maybe you would in Jamaica.

The St. Patrick's Day parade is another non-Irish tradition. The first ever Paddy's Parade took place (not surprisingly) on the streets of Boston, Massachusetts, in 1761. The next city to take up the tradition was New York in 1762. They lined the streets with bagpipers to show their connection to the Emerald Isle, despite the fact that bagpipes are a traditional Scottish instrument. The first ever Irish Parade did not occur until 1931 but considering Ireland's long fight for freedom from British rule this is not too surprising. Most of the streets of Dublin were practically war zones for the most part of the century up until this point.

The tradition of getting drunk on St Patrick's Day isn't even an Irish one, shockingly. It being a holy holiday, Irish pubs were forced to close on the 17th of March up until the 1970s.

Nor is the image of the leprechaun. Although arguably what is now synonymous with being a leprechaun (the gold, the rainbows, the annoyingly smiley exterior) isn't even close to what the original and native stories describe, the leprechaun itself is an Irish creation. Leath bhrógan, what the word leprechaun comes from, means "shoe-maker". The old stories were told of an Irish faerie who made shoes for a living and were mostly a curmudgeonly, miserable bunch. In fact it was probably more similar to the leprechaun from the infamous self-titled, low-budget slasher film that Jennifer Aniston would like wiped from her IMDB listing, just without the blatant murder and general offensiveness. 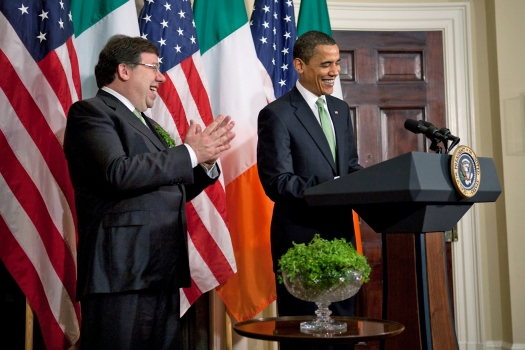 The Irish Taoiseach (the Irish equivalent of Prime-Minister) has had a long tradition of leaving the country for the holiday and having a quick tour of the United States. Whether or not this tradition started due to the previously mentioned pub ban is unknown. Our current Taoiseach, Brian Cowen, is visiting Barack Obama in the White House this year for the festival. He is bringing with him a photograph of Templeharry church in Moneygall, Ireland. This is the church where Obama's Great Great Great Grandfather was baptised. Cowen is also bringing the parish records of his father's residence just in case Obama doesn't believe him. Apparently the American President is one thing we would like to claim as being Irish.

For anyone who would like to learn more about Ireland and its real culture, the online translation service provided by Rosetta Stone has just added the native Irish tongue of Gaeilge to their files and for St. Patrick's week you can avail of their service for free. They spent six weeks in the peninsula of Dingle in County Kerry to record speakers and "absorb the local culture". Getting drunk, wearing green hats and searching for any leftover snakes, no doubt.
at 15:03