The Bluetones: You Will Be Missed

The news has started circling around that one of my favourite bands, The Bluetones, are splitting up at the end of the year. It's a strange thing to know that a band which is such a big part of my life won't be around any more. No band is forever and music seems to be a constant rollercoaster of love for musicians but of all the bands I've loved and lost, this will forever be the most significant. 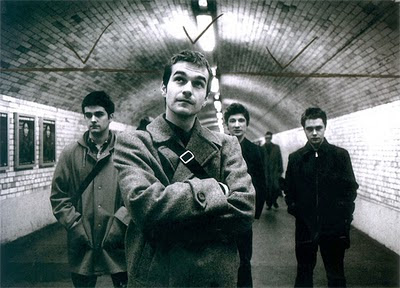 But how did we get here? Why are they so important to me and why are they hanging up their boots? Well, to tell that tale I have to go back to the 90s and the first cassette tape I ever bought for myself.


I must have been around 15 years old and sitting in my parent's living room at about 3am. At that time the television channel Sky One would play music videos through the wee hours of the night. This was called Long Play and they would often have themed 30 minutes of videos at different times. One week they had "Long Play loves The Bluetones" and played five of their videos in a row. This was my first real experience with the band's music. I had previously heard the song "Slight Return" and "If..." but paid no real attention. However, that night, I had one of those moments.

Everything clicked. The moody guitar, the choir boy vocals, the dark lyrics and the chimpanzees performing the song. I had heard Sleazy Bed Track and my life would never be the same again.

In truth, it's not just this song that interested me in the band. It's hard to describe why certain musicians manage to connect with you. Sometimes it's the lyrics. They can echo something in your own life and you get a shared moment with whoever wrote the song. In the case of "Sleazy Bed Track" it was almost an exact description of a relationship I was having at the time with a, let's say, troubled young woman. I know it sounds incredibly corny but when someone writes a song that manages to describe a feeling or an experience you've had, it's a special thing. Especially when you're a soft teenager, like I was (am).

Later, the song "If..." would do the same all over again.

The lyrics, the meta relationship of the line "it's all that I can do to sing these stupid songs to you..." and who doesn't love a good Na Na Na during times like these? Brilliant.

Of course, I wanted to see the band play live. They didn't play Ireland very often so the first chance I got was years later at the Irish musical festival called Witnness. It was a 2 day festival but the only band I cared about seeing were The Bluetones. I had waited a long time for this. I had images in my head of crowd surfing to this:

So, the morning they were due to be on, I ran down to the main stage and waited. About six acts were due to play before The 'Tones were scheduled to be on stage. But, if I wanted a good spot I needed to sit through them.

And then... it was time. I couldn't stand still. I chanted. I told everyone who would listen how great it would be. I clapped. I waited. Nothing. They never came out. Apparently they had missed their ferry over and arrived too late to set up on time. I didn't get the see them and I was crushed.

I've always said that musical relationships can sometimes be stronger than romantic ones. That some girl might hurt or leave me but that album will always be there. So considering myself and The Bluetones had been dating for a few years at this point, I took being stood up quite badly. As a result, years later when I found an email address for the lead singer Mark Morriss I took the opportunity to write a strongly worded email explaining my disappointment.

Surprisingly I got a reply, and an apology, explaining their problem that morning and stating that he was hoping to play in Ireland sometime soon. Of course, "soon" turned out to be a long time later but at the time I was touched that he actually bothered to write back at all.

I was in college and I had begun to become obsessed with another love of mine, Edgar Wright. Spaced was a TV show which had just as big an impact on my life as the 'Tones themselves. And while watching the show on an almost endless loop during my long nights avoiding work, what do I find? Of course, those bloody Bluetones were mates of his and featured not only in the soundtrack but in the background of a couple of episodes! In fact, the guys were such pals that Edgar only went and directed a video for them. The excellent "After Hours".

Finally, on the 27th September 2006 they would play a gig in Dublin. At this point I was a fan for 8 long years. I had obsessed over them relentlessly. I had upgraded albums from cassette to CD and forced copies onto disinterested friends. I bought tickets for myself and my understanding girlfriend. I was giddy as a schoolgirl.

It turns out I wasn't the only one. Myself and the other Irish members of the Blue Army bought every item of merchandise available on the stand before they ever got to the stage. A feat the band were quite impressed with. There was something electric in the air that night. The excitement in the crowd was palpable and you could tell the band were genuinely surprised by the reaction they got.

Here's some live stuff to give you an impression.

But you know, with a drunker crowd. And without the weird interview bit at the end.

Around now, I had become quite at home on the internet and decided to give the forum on their website a try. It was full of sarcastic, evil people with dark humour and sick minds. Obviously I loved it. Over time I managed to make great friends with some of the people there and count them amongst my nearest and dearest. Because of this I've ended up going to countless gigs with them and have had some embarrassing encounters.

I was thrown onstage during one 'Tones gig, against my will I might add. The awkward moment of "oh shit, I need to get down from here somehow" and the band looking at me like I had two heads was one I won't forget soon. Apparently, Adam Devlin the guitarist later referred to me as the most reluctant stage diver he had ever seen.

I also managed to make a tit of myself during one of Mark's solo shows. I'm a sing-a-long crowd participant and usually there is no problem as the music drowns me out. However, on this night I was in some sort of acoustic amplifier spot in the room and apparently everyone could hear me loud and clear... Including Mark himself. It resulted in much verbal lambastic (all in good fun... I hope) and a laugh from my 'Tones forum friends.

I was attempting the back-up parts to this song:

As you can imagine, I was horrified to be told how out of tune I was. But the several drinks I had meant that I couldn't help myself.

There are more stories like this and hundreds more I'm sure my friends would tell you.

I guess, what I'm trying to say is; I meant it when I said the relationships you form with bands are sometimes stronger than the romantic ones in life and when that relationship ends, it hurts just as much. I'll be there for their last gig this September, probably with a wreath but also with all the friends I've made because of the music. I'm gonna miss the band but I'll always have the memories. Thanks for them.

Play us out fellas...