Last night myself and my girlfriend were talking about the Word-A-Week video I made a few days ago. She provided the flashing light for the Spider-Man musical number by waving a torch. When I was editing that video together I realised something that I was oblivious to while recording. She had made a "meow" noise while waving the light.

It was baffling to me at the time and we had a good giggle at the lunacy of it all. During our conversation, we were both rather tired as it was late at night. The missus was trying to tell me I should have left the cat noise in the video. Her argument was that it made a good sound effect. While making her case she uttered quite possibly the greatest sentence an internet geek like me could have heard from another human being. She told me that the sound effect would work in the video because "Spider-Man was West Wing a cat".

I understand that she meant to say "Spider-man was rescuing a cat" and that her sleepy mind just mixed up the words, probably because she was fantasizing about Martin Sheen at that very moment. However, my mind could barely contain the awesome possibility of the suggestion. Spider-Man West Winging a cat.

I had to see how this could work.

Here are my ingredients.

Wall-crawling, web-slinging, ginger loving man in tights himself, Peter Parker. My favourite comic book character since I was very little.


He's not exactly known for his love of either politics or Martin Sheen. His long term nemesis J. Jonah Jameson is now Mayor of New York City but Spidey has helped Presidents in the past.


He's not a cat owner but he has had run ins/casual sex with Felicia Hardy also known as The Black Cat so maybe he does like them but has allergies. 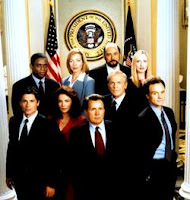 Aaron Sorkin is the kind of writer that makes you want to be a better man. His run on The West Wing is fantastic and if you haven't watched the show yet, you should.


Spider-Man does not feature on the show at any point. Unfortunately. Although Martin Sheen will be appear in the new Spider-Man film.


No cats were elected president during the run of the show. Unfortunately. 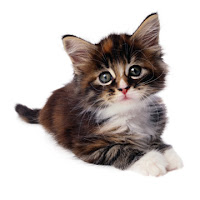 I had a cat from the age of 4 to 21. Her name was Tammy. She ruled. The cat pictured is not Tammy. Cats are better than dogs: FACT!


We are aware of no particular cat following of Spider-Man. However, cats will often kill and eat spiders so the chances probably aren't good.


Cats rarely watch TV but they are a fan of politics, mostly because of their own thirst for power.

So what, prey tell, came to your mind when this sentence for the ages was uttered? I hear you ask, and well you might. I don't like to brag about my picture editing skills, although they are apparent.

Toby hopes that all those hours preparing POTUS as paid off as President Parker takes questions from the press room while Vice-President Kitty looks unamused. 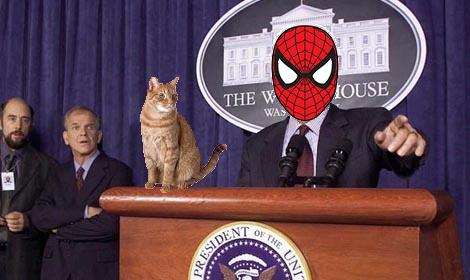