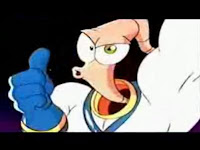 I loved Earthworm Jim. It was one of the few things that I got into from the very beginning. I had played the original video-game on my Sega Mega Drive (Genesis for those Americans reading) and adored it for it's anarchic humor. Humor wasn't really a big selling point in games back then but when you get to launch a cow into space or ride a giant hamster you either embrace the madness or you miss out on all the fun.

Jim then got the cartoon show and I was pretty excited. As a grown-up I've gotten used to seeing things I like in one medium get transferred to another pretty regularly, I guess it's part of being a comic book fan, but back then it was a new sensation to me. I would get to scrutinize something for the first time. Would it keep things from the game? Would it change the stuff I like? Luckily I was never disappointed. Yeah, those disappointments came later in life. I'm looking at you Spider-man 3.

One of the beauties of the show was the fantastic ensemble of bad guys. The names alone are great; Queen Slug-for-a-butt, Psy-crow, Bob The Killer Goldfish, Evil The Cat (who rules the planet Heck) and Professor Monkey-for-a-head. The Professor particularly fascinated me because even as a kid the design impressed me. I would spend hours staring at where the join was and it would just mess with my little mind.

The show only got two seasons and little or no syndication over the years. As time went on I learned to appreciate a lot about the show. For one, Jim himself was voiced by non other than Dan Castellaneta (that's Homer Simpson for you folks who don't pay attention much). I've forgotten way more than I remember but one thing I still get stuck in my head from time to time is the epic theme tune.

If you don't sing along you're a robot.