The Bluetones. Live in Leeds.

There are only a few bands I've seen in concert more than twice. R.E.M. is one. The Frames are another. The Bluetones trumps them by quite a number of gigs. I'm kind of a part-time band-stalker. 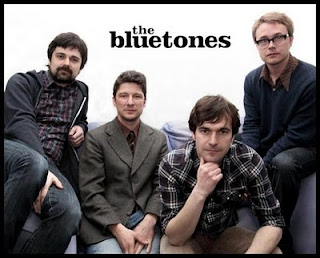 The obsession started around '98 when I fell in love with an album called Return To The Last Chance Saloon. I was 15 and it was one of those life changers. I bought it on tape (that's right kids, that thing before CDs) and played it an infinite number of times in my room as I sulked that the world didn't understand me. Unlike other teenage music obsessions, this one actually held up over time and became my "desert island record", the one I'll save in a fire.

Over the years I've made good friends with other fans and we all meet up for a few drinks and a bit of a dance at the gigs. On Saturday I flew over to England to meet a bunch of my fellow stalkers and see The 'tones play in Leeds in a little venue called Escobar. Some would say that "little venue" was being generous and they're 100% correct. I'm a generous person.

The band played under some romantically festive Christmas lights and serenaded us with a set chock full of tracks from the new album A New Athens and a couple of classics thrown in.The new stuff sounded great live and the band were playing tighter than I've heard them in quite some time. Highlights of the night included some free-form improvised jazz, the keyboardist's hair and a drunk man down the back of the venue who kept singing She's Electric for some reason unknown to the universe.

So check out their current single below. The video is made by 'tones bass player and rather damn good artist Scott Morriss!


The Bluetones - Golden Soul from scott morriss on Vimeo.
at 21:12