Two Is The Loneliest Number

Since I've started writing my own webcomic earlier in the year I've been searching out good examples of the medium. I recently gave a little spiel about Axe Cop. Now it's The Loneliest Astronauts' turn... That's a lot of links for a first paragraph! 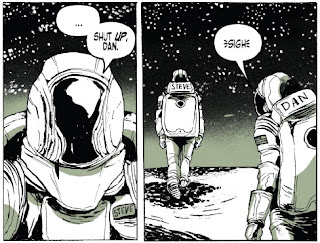 Written by Kevin Church and illustrated wonderfully by Ming Doyle, The Loneliest Astronauts is of a simple premise. Two guys, Dan and Steve, are stranded on a space station after a disaster wiped out all their crew and communications. Much like Red Dwarf the comedy comes from the fact that these two guys, who are now stuck together indefinitely, hate each other. Despite being in identical space suits (they are only distinguishable by their name tags) Dan and Steve are very different.
Dan is an excitable, friendly, chatty type while Steve is a more diligent, irritable and spiteful sort. Due to this clash in personality it may seem sometimes like Dan is essentially getting bullied but Church has done well to make sure that Steve doesn't dominate in any serious way and at the end of the day the men are still equals. It's more like Steve is taking their situation badly and is acting out. 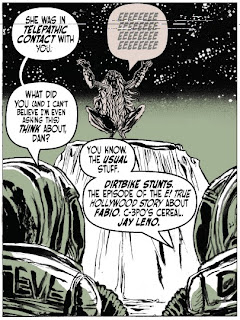 The strip started in September 09 and, despite the odd break here and there, has been updated every Tuesday since. You may think that being stuck on an isolated, barren planet may result in a pretty limited spectrum of stories but through dream sequences and, more recently, flashbacks we get an odd reprieve from their new home.
Personally though, I prefer the stories of life on the planet, Church's tales of isolation and boredom are often quite touching. A certain level of melancholy in comedy can elevate it to levels above the norm and Doyle's fantastically expressive art certainly communicates that here. It's not that I think the stories off world are of a lower standard, they're funny and offer great insight into the characters, it's just that they lack that little something extra of the normal ones. However, in their own way, these excursions help underline the futility in Dan and Steve's life by reminding us what was behind Curtain Number 3 and "what they could have won".
I love this comic and can't say enough about Doyle's work. To be able to show such emotion in a faceless spacesuit as consistently as she does is not only impressive but a skill not many other artists in her field could pull off so well. Go check it out. I read the whole thing in an hour or two so you'll fly through it and be back for more next Tuesday.