This Week's Obsession (AKA Guilty Pleasures)

I go through phases when I'll get really excited about something. Partly because it's new to me and partly because it tickles a funny bone of my fascination.

After a conversation with a good friend recently, I was introduced to the idea of "idol" bands. This has nothing to do with American Idol or that brand of competition. Idol is actually a term used for a certain type of person in South Korea, Japan, China, Hong Kong and the surrounding area. They're people who are... better than us, shall we say. They're basically adored because they're pretty and talented at something. Not really an unfamiliar concept to us westerners but I guess these folks are on a slightly different level to most celebrities and are put into this category.

Idol bands tend to be made up of really, really ridiculously good looking people who can sing a few notes and dance in unison with about a million other band members. It may sound a bit cynical and crap but they're well executed pop groups and it has gotten my attention. 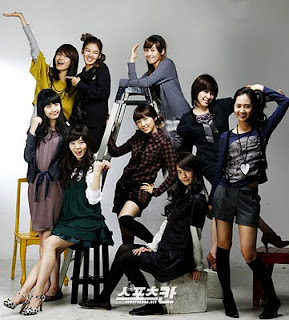 Now I know what you're thinking "But I won't understand them, they're singing in Korean". Well luckily they don't sing entirely in one language. This is one of the many reasons why the music tickles me so much. One moment they're singing in gibberish (it's only gibberish to me because I don't understand it) and the next you hear "super bad boy" or "chocolate love". By the way, chocolate love is a great phrase in any language.

Check out the bubble-gum madness in this video. The song is entitled simply "Oh!". I dare you to get it out of your head after listening.

It's in your head, isn't it. Also, in case you're wondering "oppa" is kind of like "baby" in terms of pop singing. A term of endearment that you'll hear a lot in these songs.

It's not all super sweet tween pop. Sometimes it's merely sweet teen pop. A subtle difference but if it were all the same as above you might shoot yourself in the face.

Don't worry girls, there are boy groups too. One particular boy band is called Super Junior and it has 13 members... THIRTEEN! I mean seriously, I know it's good to give options but that's too much.
Apparently there are only 13 on tour at the moment. One is serving his mandatory army duty, one is pursuing an acting career and one who is suing the company that made them.

These guys are apparently so popular that they sometimes break off into sub-groups. So 3 will do an album together as a band while 4 go off and do the same. They do this in different genres so they make sure they appeal to everyone.

Have a gander below to see if they tug at your heart strings.


What I love is that these bands are feared in North Korea as corrupting their youth. This article in the Daily North Korea talks about how their influence is affecting North Koreans' speech, dress sense and attitude. You kind of have to respect any pop group that fucks with fascists state like that.

P.S. - If you have a spare two minutes I think it's worth your while to read that linked article above because not only does it pertain to this little rant but it also gives you a view into the craziness that is going on in North Korea as far as them trying to control every aspect of people's lives.
at 13:39